A third-generation Vancouverite whose grandfather and father were in the insurance business, Peter M. Brown attended the University of British Columbia. At age 20, a Montreal-based brokerage firm, Greenshields, offered to send the young graduate on a training program. Brown was assigned to corporate finance, a rare opportunity for someone just starting out. Under the tutelage of Brad Firstbrook, he turned “from a wastrel into a workaholic” who loved the atmosphere of Montreal. “It was a truly international city and Expo 67 was a great world’s fair,” Brown recalls. “It was a wonderful time to be there.”

He missed his beloved B.C., however, and in 1968 asked to be transferred to the Greenshields office in Vancouver. Not long afterward he met Ted Turton. Turton had made some money in the mining business and bought control of a little investment company called H.H. Hemsworth. After a four-hour lunch, Turton said to Brown, “Why don’t you come and run it?”

Brown sought the advice of his father, who told him: “Don’t do it.” His father pointed out that he was one of the youngest shareholders in Greenshields, that it was a great firm and that he had an outstanding career ahead of him. Brown, revealing the gut instinct and appetite for risk that would define his career, resigned his position at Greenshields and joined Turton at Hemsworth.

The new firm, initially called Canarim, had almost no capital, no reputation to speak of and no distribution. “Everyone said we’d fail,” says Brown. Over the next year he won more than a million dollars in a regular card game, having been staked by Turton. “I loaned that money to the firm — that was the initial capital of Canaccord. It was tough going for awhile. The investment business is a Toronto head-office business, so I had to grow my own people.”

Brown hired many of them right out of school, which gave Canaccord a different culture than the older, more established firms. “I needed to make it a place where people wanted to work. We were tiny, but we were passionate about the business. As we started to win, that added to the culture — the little guy taking on the big guys. Culture costs you a bit and takes time to develop, but in the long run it gets you better results. People stick with you, so you don’t have to recruit and train continuously. When people like each other, like the environment, they do better work. I’m more proud of the culture we had at Canaccord than of the financial success we enjoyed.”

Through partnerships and acquisitions, the company grew steadily. Getting established in Toronto took time. “It would have been even more difficult it we’d been public,” he says. “When you’re public you have to be accretive, quarter to quarter. Toronto was a long-term project — there were losses for five straight years. Same in London — when we bought T. Hoare & Co. we had losses for three years. But we were investing, building a business. You have to keep rebirthing it, working on it. People get old, they get sick, they get rich. People change, and you have to keep up with the changes.”

LESSONS FROM THE TOUGH TIMES

The difference between success and failure, Brown learned, becomes clear not during good times but in tough periods. “We reacted well when markets corrected,” he says. “We constantly looked to grow, and we took over a lot of little firms that were in trouble — C.M. Oliver, Brink Hudson & Lefever, Merit Investment, T. Hoare in London. At each firm there was always a core of good people we’d keep. We were opportunistic during the hard times, and it served us well.”

In 2004, Canaccord finally went public, raising $70 million in the initial IPO. “We needed the money,” says Brown, “because we were growing so fast.” A year after being listed on the Toronto Stock Exchange, Canaccord completed a listing on the Alternative Investment Market (AIM) of the London Stock Exchange. The company is now dual-listed under the symbol CF.

By the time Peter M. Brown had run Canaccord for almost four decades, some large shareholders were concerned about a succession plan. “I’d never given it much thought, to be honest,” he says. “It was my baby and I guess I sort of imagined I’d be there forever. But I realized I’d had enough. It’s a very hard, stressful, Type A business — the market’s changing every minute. So I went to Paul Reynolds, who’d worked for me for 24 years, and asked if he wanted to take over.” When Reynolds assumed control, in 2012, Canaccord Genuity had $750 million in revenue, $550 million in cash, no preferred shares and a clean balance sheet. “We’d started with $23,000, and the market was now valuing us at about $1.2 billion.” 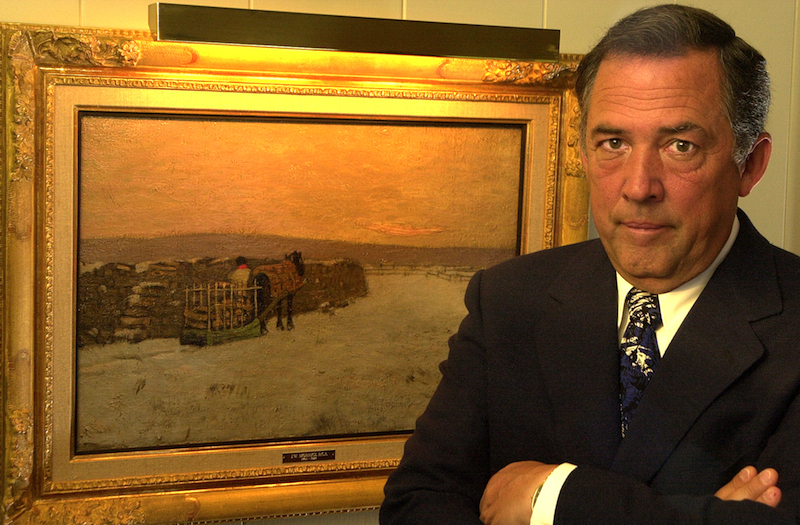 Brown had transformed a tiny, retail-oriented firm in Vancouver, focused on resource companies, into Canada’s largest independent investment dealer, with offices in 10 countries worldwide. He had played a vital role in financing hundreds of B.C. businesses and building the province’s economy. “Did I know when we started that we’d become the biggest independent firm?” he says. “No. I don’t think most successful people saw where they were going when they started. Business is little steps, some forward, some back. You want to get a little better each year. We had a passion, and that’s what keeps you putting one foot in front of the other. I like the saying, ‘A man with passion is worth forty people who are merely interested.’”

COMMUNITY SERVICE: EXPO 86 AND BEYOND

That passion spilled over to community service. Throughout his career Brown has been a generous contributor to the community, serving on the boards of numerous private sector and Crown corporations. In 1986, he was vice-chairman of Expo 86, the World’s Fair in Vancouver, and he chaired the UBC board at the same time. “I’d done charity work before, but those two jobs changed my life,” he says. “They introduced me to people I never would have met otherwise, like the vice-president, academics, at UBC, Dan Birch, a wonderful guy. At the Police Foundation I got to know Chief Constable Jim Chu, one of the finest men I’ve ever met. Seeing the city through the eyes of the police was a great learning experience. Business life can be a narrow rut. When you step outside it, get involved in the needs of others, it expands your horizons.” 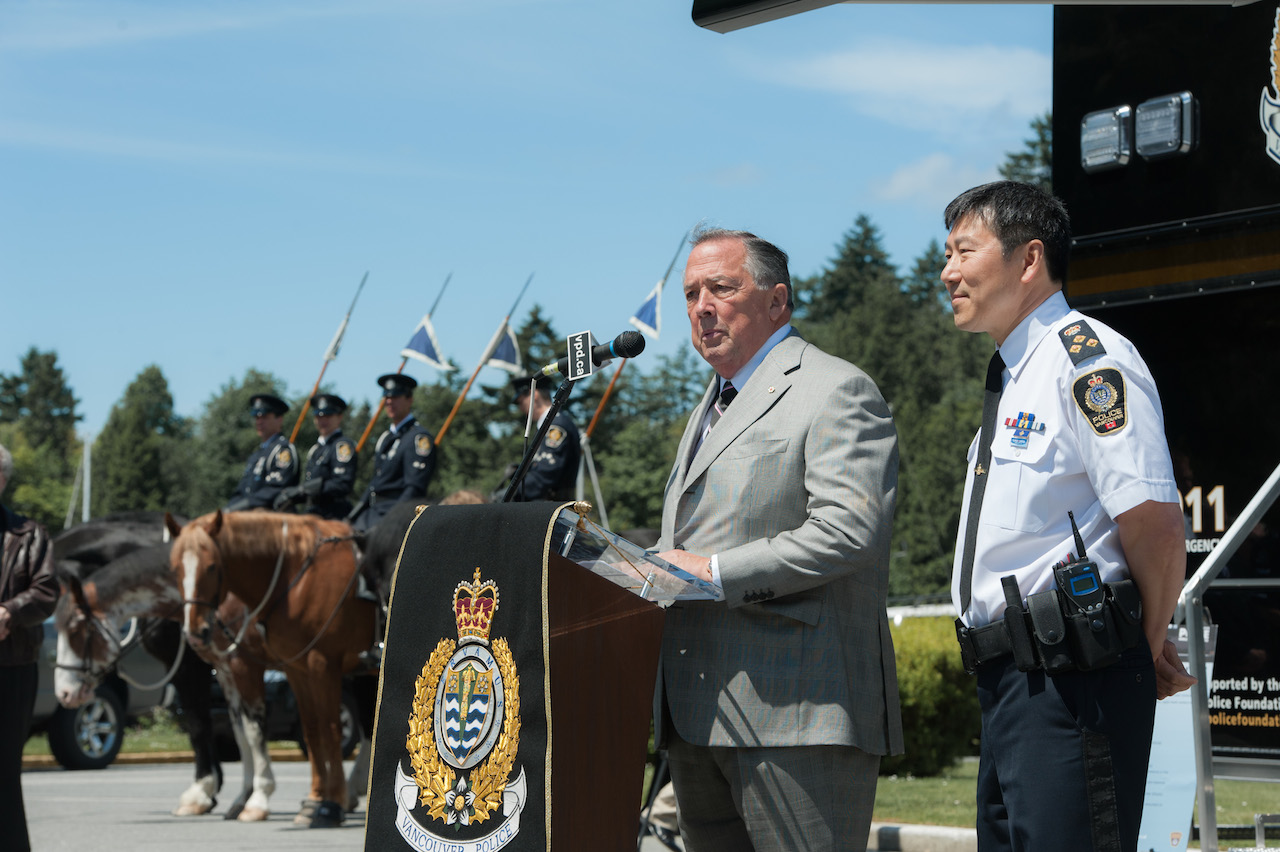 Peter M. Brown has served as chairman of the Vancouver Stock Exchange, BC Place Corporation and BC Enterprise Corporation. As the federally appointed Lead Director and Member of the Finance Committee for the Vancouver 2010 Olympic & Paralympic Games, he helped bring the 2010 Winter Games to Vancouver and Whistler.

His business achievements and community contributions have earned him a long list of awards and distinctions, including the BC Chamber of Commerce Businessman of the Year Award, the Pacific Entrepreneur of the Year Award and the Distinguished Service Award by the Prospectors and Developers Association of Canada. In 2003, he was honoured with a Commemorative Medal for the Golden Jubilee of Her Majesty Queen Elizabeth, as well as the Order of British Columbia. In 2010, he was inducted into the Canadian Mining Hall of Fame and presented with the Entrepreneur of the Year Lifetime Achievement Award, and then in quick order he was recognized with inclusion in the Business Laureates of B.C. Hall of Fame, the Canadian Business Hall of Fame and the Investment Industry Association Hall of Fame. The Vancouver Board of Trade celebrated his leadership in 2012 with the Rix Award for Engaged Community Citizenship. In recent years he has received honorary doctorates from the University of British Columbia, Emily Carr University of Art & Design, the Justice Institute of B.C. and Wilfred Laurier University.

“I’ve been fortunate,” says Brown. “I’ve lived through the best of times. We had a growing population, and every ten years there was a correction and then we were back into a boom. Now we’ve got an aging population, which is a very different proposition. When I was building Canaccord it was a great time to be in business. Now that part of my life is behind me, and it’s time to give back.”